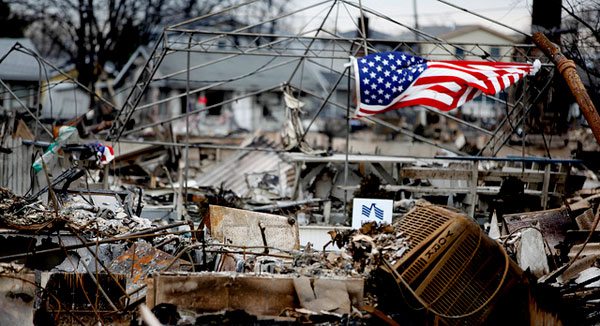 The days when a hurricane, tornado, or other natural disaster is raging, along with the immediate aftermath, are both the worst and best of times. Why they are the worst is obvious. But, these moments also attract the most attention, assistance, and funding. Allow a few months or years to go by, and much of that dries up, diverted to the next disaster or event in the news, the effects of the crisis typically last a very long time.

“Long after the waters have receded, Americans will be grappling with the effects of Hurricanes Harvey and Irma, which broke records and ruined lives as they wreaked havoc on the United States and the Caribbean,” warns the Washington Post.

For example, reports the Post, “state and federal health authorities have warned residents to be on the lookout for mold in their homes, strange rashes on their bodies, stray jagged items in standing water that can lead to infected wounds, and depression and post-traumatic stress disorder.” Those all take a while to develop.

“As conditions dry up, we will cycle out of the weeks of floodwater mosquitoes, and then begin cycling into a period of time where the disease-transmitting mosquitoes will emerge and build up,” Sonja Swiger, a veterinary entomologist at Texas A&M AgriLife Extension Service, said in a statement. “So, the initial run of mosquitoes is not too much of a disease threat…It’s the next run we really need to be concerned about.”

Likewise, fully a year after Hurricane Katrina, residents reported an increase in suicidal thoughts, according to a 2015 paper published in the journal Nature. The same is likely to be true for Harvey.

Ben Brown from placemakers.com divides the time post-disaster into several stages. The first is the buildup to the crisis and the “hit.” During the second stage, the tragedy is offset by the rush of attention and inspiring stories of volunteers rushing to their fellow humans’ aid. However, then comes “stage three.”

Building beneath the stage two celebration of everyday heroes is the stage three inevitability of hero fatigue. The first responders, the ad hoc volunteers as well as the pros, are soon overwhelmed by the scale of demands—the logistics of organizing and managing shelter, transportation, food, medical care and clean-up. Exhaustion sets in. Fear of chaos looms. Images of neighbors helping neighbors are replaced by weary property owners sitting on porches with shotguns in their laps. It’s everybody for themselves.

Brown believes this period can also, however, be a time of fresh ideas and initiatives—new thinking that is typically squelched once the various stakeholders eventually come around and allocate the additional resources needed.

This window, this low point of hope, might also be the best opportunity for consensus on a get-something-done agenda, for committing to strategies to avoid reenacting the social and economic misery of the present in the future.  As soon as the immediate emergency recedes, leaders…might be up for a talk about better planning approaches. They might even be agreeable to considering the big ideas a lot of us like—restricting building in vulnerable areas, toughening building codes, enacting zoning that encourages density for more cost-effective storm water management and less private automobile dependence.

The key, he says, is to take bite-sized steps—implementation of small components of big ideas, models that can be put in practice fast to demonstrate their utility and appeal, then replicated and scaled up when funding is obtained.

If residents and community stakeholders don’t capitalize on this opportunity for an equitable fresh start, then the result is likely a bounce back to a risk-prone status quo. Entrenched powers leverage “federal dollars to rebuild or allow to be built much of the infrastructure, housing and commercial structures that was there before—too often in the same places that were considered too risky before and are just as vulnerable going forward.”

Just how to tap into additional funding to carry communities into long-term recovery is the challenge. This is particularly true in light of President Trump’s proposed cuts in the Department of Housing and Urban Development, which helps rebuild homes, parks, hospitals and community centers.

One emerging solution is “pre-agreed financing”—such as sovereign parametric insurance, risk pools, or catastrophe bonds. (In sovereign parametric insurance, a premium is paid by a government and payouts are obtained based on an objective trigger, such as wind speed or the Richter scale for earthquakes.) For example, the Caribbean Catastrophe Risk Insurance Facility, set up 10 years ago as a risk pool with 17 member countries, already has announced it will pay out, within a fortnight, $15.6 million to the governments of Antigua and Barbuda, Anguilla, and St Kitts and Nevis—providing resources to get public services and infrastructure functioning again.

However, Lawrence Vale, author of “The Politics of Resilient Cities: Whose Resilience and Whose City?,” adds that it’s not just reducing risk that should be of concern when rebuilding. Equitable development should be a priority as well. “Who bears the brunt of the crisis and whose interests are best served by the proposed interventions?” he says we must ask. If resiliency is bouncing back, what are we bouncing back to? In too many of our communities, there already is entrenched inequality. Will we bounce back to more of the same?

Or, even worse, resources may be used for what Naomi Klein has called “disaster capitalism”—remaking the community to advantage the privileged classes at the expense of the “less desirable.”—Pam Bailey